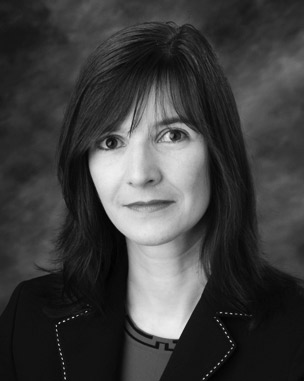 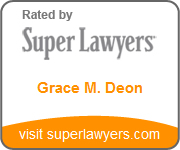 Grace M. Deon is the President and CEO of Eastburn and Gray. She is also a Shareholder and a member of the firm's Management Committee.

As a member of the firm’s Litigation Department, Grace represents companies and individuals in employment law matters, including claims brought under Title VII, Section 1981, the Americans with Disabilities Act, the Age Discrimination in Employment Act, the Equal Protection Act, the Family Medical Leave Act, the Pennsylvania Human Relations Act and the New Jersey Law Against Discrimination Act.

Grace has litigated cases involving the enforcement of non-competition and non-solicitation restrictive covenants, from both the employee and employer perspective, and has also defended Pennsylvania municipalities and school districts in a variety of contexts, including claims brought under Section 1983, Title IX and the First Amendment. In addition to litigating employment related claims, Grace reviews, prepares and negotiates employment agreements and severance packages, counsels employees and employers about a variety of day-to-day human resource related issues, prepares employee handbooks and workplace policies and presents employment related seminars to employees and management.

In addition to her concentration in employment law, Grace litigates commercial matters (including but not limited to breach of contract, negligence and fraud) and personal injury based claims. Further, for more than two decades, Grace has represented Pennsylvania school districts in special education matters, including representation at administrative due process hearings and appeals to State and Federal Courts.

Ms. Deon is an experienced trial attorney, who has tried cases before federal and state tribunals, argued at the federal and state appellate levels and appeared before a variety of administrative agencies, including the Office for Dispute Resolution, the Equal Employment Opportunity Commission, the Pennsylvania Human Relations Commission, the Pennsylvania Labor Relations Board and the Bureau of Unemployment Compensation.

Grace is a member of the Pennsylvania Bar Association ("PBA") and the Bucks County Bar Association ('BCBA'). Grace, by appointment, chaired the PBA's Legal Services for Exceptional Children Committee from 2011-2015. In that capacity, she oversaw one of the preeminent statewide conferences in the area of special education. She was honored in May of 2015 with a PBA Special Achievement Award for her efforts supervising this Committee. In 2018, she was again appointed a member of the committee.

In 2017, she served as Past President of the BCBA Board of Directors having served as President during 2016. Prior to that, she served as Secretary to the Board and as a member of the Board for two terms. She has also chaired the Bench Bar Relations and Continuing Legal Education Committees. Grace remains an active member of the BCBA's Civil Litigation and Federal Court sections and enjoys being a member of the Bucks County Inns of Court, a membership by invitation only. In addition, through the Bucks County Legal Aid Society, Grace represents women and men, on a pro bono basis, who either seek protection from domestic abuse or require a defense against such an action.

Grace has participated as a course planner and presenter at Continuing Legal Education seminars conducted by the Pennsylvania Bar Institute, the Bucks County Bar Association and the Bucks County Inns of Court.

Grace is licensed to practice in the Commonwealth of Pennsylvania and the State of New Jersey.

In 2003, Grace was approved by the judges of the U.S. District Court for the Eastern District of Pennsylvania to serve as a federal arbitrator.

Grace received her Bachelor of Science in Accounting and a minor in Philosophy from St. Joseph's University in Philadelphia and her Juris Doctor from the Temple University School of Law, Philadelphia, Pennsylvania, where she received recognition for Distinguished Class Performance in Trial Advocacy from the Honorable Michael Stiles, former Attorney General of the United States District Court for the Eastern District Pennsylvania. Prior to joining Eastburn and Gray, P.C. as a law clerk and then full time, Grace participated in internships with the Office of the U.S. Federal Defender and the Office of the Philadelphia City Solicitor.

Grace, a resident of Bucks County for more than forty years, has actively participated as a board member and fundraiser for numerous non-profit agencies throughout Bucks County.

For nearly 25 years, Grace has acted as the President of the Distribution Committee for the Bucks County Foundation, a community trust of nearly $10 million that oversees grant applications and awards to a variety of charitable organizations in Bucks County, Pennsylvania. Grace currently serves as a Board Member of the National Alliance for Mental Illness (NAMI) - Bucks County Chapter, an organization that provides services for people with severe mental illnesses. She previously completed multiple terms as a member of the Board of Directors of the non-profit Network of Victim Assistance ("NOVA"), a United Way agency. NOVA supports, counsels and empowers victims of sexual assault and other serious crimes and works to eliminate violence in Bucks County through advocacy, community education and prevention programs.

Grace has served multiple terms as a member of the Board of Directors for the following non-profit organizations: the Bucks County Historical Society ("BCHS"), VITA Educational Services/Bucks County Literacy Center and the Community Conservatory of Music. Grace and her husband co-chaired and served on the committee for the BCHS’ Savory Sampler, a black tie affair benefiting the museum’s educational programs since 1994 and they also chaired the "Crusader Ball" for the benefit of the Bucks County Unit of the American Cancer Society on multiple occasions. For three years, they co-chaired the Mercer Museum's premier fundraising event, 'Cocktails at the Castle.'