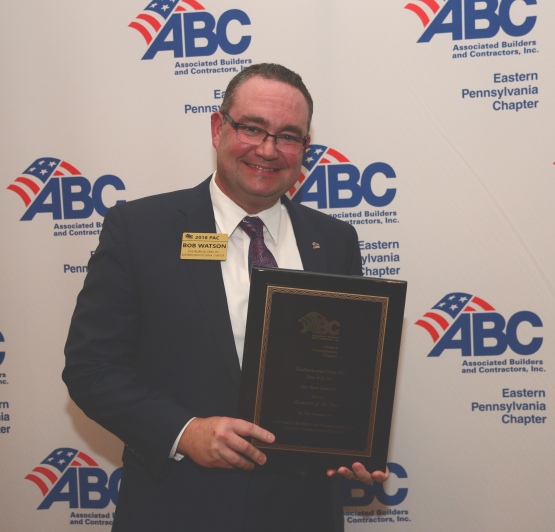 Eastburn and Gray, PC was presented with Associated Builders and Contractors’ Eastern Pennsylvania Chapter’s Associate of the Year award at the Excellence in Construction Awards Gala on Thursday, November 8, 2018. The award is given to a member that has made a significant contribution to the association through committee involvement and sponsorship of ABC events.

Robert R. Watson, Jr. has been actively involved with the ABC both as a member and past Board Member for almost 20 years. In addition to currently serving a taskforce co-chair, Mr. Watson is a frequent lecturer on construction payment and contract issues. Mr. Watson has practiced construction law since 1999.

ABC is a national association with 75 chapters representing more than 23,000 merit shop construction and construction-related firms with nearly two million employees. Eastburn and Gray is a proud sponsor of the ABC Eastern Pennsylvania Chapter. To learn more about ABC, including membership and sponsorship opportunities, please visit www.abceastpa.org.

Photographed here is Bob Watson accepting the Associate of the Year award.